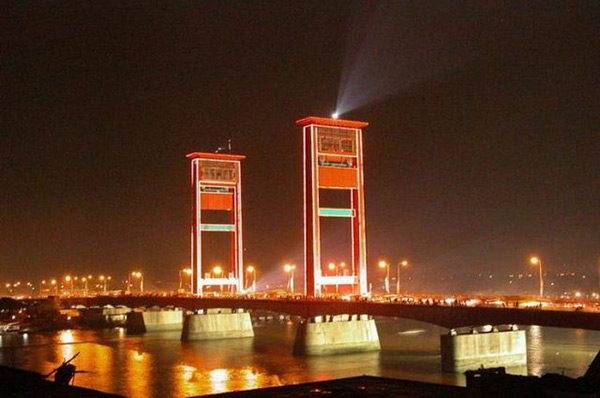 Palembang is the second largest city in Sumatra Island after Medan and seventh largest city in Indonesia after Jakarta, Surabaya, Bandung, Medan, Semarang, and Makassar. Moreover, it becomes the capital city of the South Sumatra province.

ased on the historical background, Palembang is on of the oldest city in the Malay Archipelago, and even in Southeast Asia. This is because of it has a history of being the capital city of the Sriwijaya Kingdom,  which controlled a large part of what is now Indonesia, Malaysia and Southern Thailand, which also influenced much of Southeast Asia. Palembang is located on the Musi River banks on the east coast of southern Sumatra.

Since 2005, the President of Indonesia has declared Palembang as the "City of Water Tour", precisely on 27 September 2005. More recently, Palembang has drawn further international attention as one of the host cities of the 2011 Southeast Asian Games and 2013 Islamic Solidarity Games.

As one of big city in the province, Palembang is also keeps some of potential destinations in town. One of them are Musi River wich is also becomes the signature icon, together with the wellknown Ampera Bridge. Furthermore, Since ancient times, Palembang has been a cosmopolitan port city which absorbs neighboring, as well as foreign, cultures and influences.

The influences and cultures of coastal Malay, inland Minangkabau, Javanese, Indian, Chinese, and Arab, has created a rich Palembang culture. Throughout its history, Palembang has attracted migrants from other regions in the archipelago, and it has made this city as a multi-cultural city.