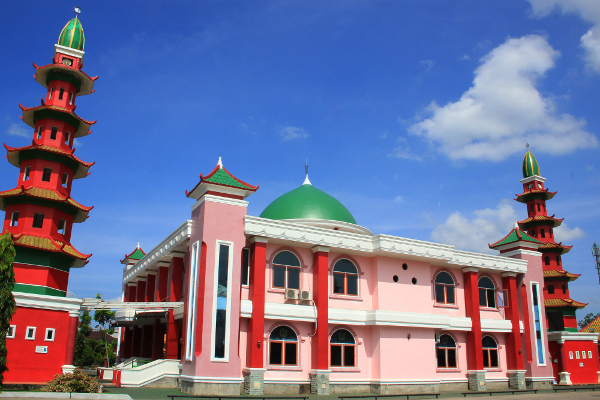 Walked to the south of the central Palembang city, precisely in residential area Amin Mulia, Jakabaring, there are light-colored mosque building with combines the Chinese and Muslim architecture. The mosque was built on the initiative of Chinese Islamic Association of Indonesia (PITI; Persatuan Islam Tionghoa Indonesia) Palembang is known as Al Islam Muhammad Cheng Ho Mosque.

At the beginning of its existence, Cheng Ho Mosque Palembang built with the background to keep good relations between people of Chinese descent and Palembang society in general, as well as a place to deepen the teachings of Islam and introduce to the public.

The use of the name “Cheng Ho” also not without cause, Cheng Ho is known as China's naval commander of the XV century. Cheng Ho is believed to lead an expedition along the archipelago trade using very large fleet. Although initially journey of Cheng Ho is a trading expedition, but indirectly he helped introduce Islam in Palembang. Due to good behavior and bring peace, Cheng Ho had many adherent.

Cheng Ho Mosque Palembang measuring about 20x20 meters built on a land area of 4,990 m2. The land is a land grant given by the Governor of South Sumatra province at the time, Syahrial Oesman. In its development, Cheng Ho Mosque is equipped with two towers, each named Habluminallah and Hambluminannas. While at the bottom of the tower there is a place of ablution measuring 4x4 meters.

Both towers Cheng Ho Mosque Palembang has 5 levels which symbolizes the number five prayers done in a day. Tower reaching 17 meters high, the figure is a symbol of the number of cycles needed to be done by any Muslim in a day. While on the outside tower spiked Palembang ornaments in the form of goat’s horn. The use of ornaments is not without cause, as well as Cheng Ho Mosque was built in the land of Palembang, the public is also aware of the closeness between Palembang to Chinese culture. When it comes to the appearance, it applies Chinese and Malayan architecture. Visitors will be amazed by it. They can even take some pictures in front of the mosque, after all.

Al Islam Muhammad Cheng Ho has a majestic appearance. It also can accommodate about 650 people. Its unique architecture becomes the main attraction of the mosque. It combines local, Arabian, and Chinese aspects. The mosque is also surrounded by luxurious houses. The dominant colors of mosque are red and green jade. Another unique thing is the lack of divider between men and women. Male prayers use the ground floor while the female prayers use the second floor.

There are several rooms inside the mosque. These include an office, a multi-purpose room, a library, and an ample room for the imams. Cheng Ho Mosque is indeed the place for worshipping. Local people also use the mosque for numerous religious events. In fact, it has been an interesting tourist spot. Not only the mosque attracts local tourists, but it also attracts many foreigners. Some of them come from Russia, Malaysia, Taiwan, and Singapore. Not to mention it is a symbol of culture unity.

How to Get There
Al Islam Muhammad Cheng Ho Mosque is located in Amin Mulia Residential area. It is in Jakabaring, Palembang. The entry point is in front of the Jakabaring Sports City gate. In order to reach this point, tourists can use either a private or public transportation. As long as they are in Palembang, it is easy to reach the mosque. There are numerous options of local vehicles to use. These include taxi, Bajaj, ojeck, etc. Not to mention the fee is reasonable.