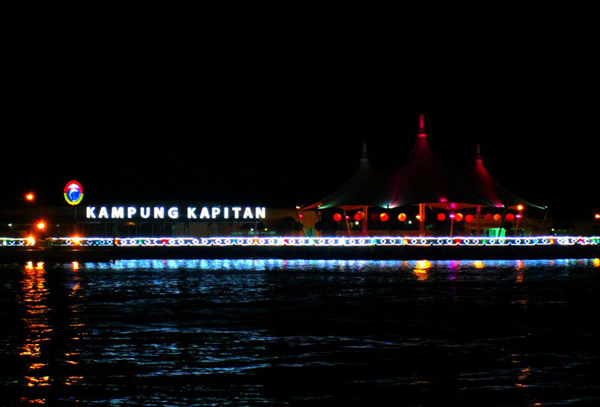 Entering the Kapitan’s House
The village is also famous for its traditional house. The house represents local’s architecture, which comes with a pyramid roof (Limas). Though, it also applies the European architecture style. The influence came from the past invasion of the Dutch. Kampung Kapitan has 15 prime buildings. Even though the Chinese are quite dominant, the houses come in different styles. That means it doesn’t only apply the Chinese architecture. The biggest houses are the Kapitan’s. There is a beautiful garden near to these buildings. What a perfect place to relax!

Kapitan was actually a Chinese. Today, the house is inhabited by his descendants. The house is mainly made of the wood. In the living room, there are some paintings and photographs. There is also a picture of the 10th Kapitan, wearing a uniform. A unique part is its optical effect. The eyes of the Kapitan may follow you regardless of the location. Apart from the photograph, there is also the painting of the 10th Kapitan. It also has the same uniqueness as that of the picture.

In the next room, there is a place for worshipping. Everyone may enter this room. Still, women who are during their period shouldn’t enter it. It’s because the place is considered sacred, just like the mosque. Next to this house, there is a building. It is actually the workplace of the Kapitan. The Dutch often came here to discuss several works with him. Also, this was the place for throwing a party. Overall, both the house and the building are quite interesting.

Just like other Chinese houses, there is a courtyard in the middle of the house. It’s used for worshipping. What about the other part of Kampung Kapitan? In the midst of the village, there is an abandoned field. There were 2 lion statues in front of the houses. Though, there are no more. Not to mention most of the descendants of Kapitan left the village. The women lived with their husband in another city. Once tourists enjoy a fun exploration in Kampung Kapitan, it is the time to enjoy local foods at a nearby restaurant. The location is near to Musi River!

How to Get There
Kampung Kapitan is located in 7 Ulu. It is reachable either by a land or water transportation. By land, tourists should visit the Klinik Market. Next, they should head to the three-junction. From here, they should turn right. By now, there should be a plate of Kampung Kapitan. By water, they should start from Benteng Kuto Besak tourist area. Next, they can rent a powerboat. The destination is definitely the Kampung Kapitan. No worries, the boat can accommodate up to 10 people.