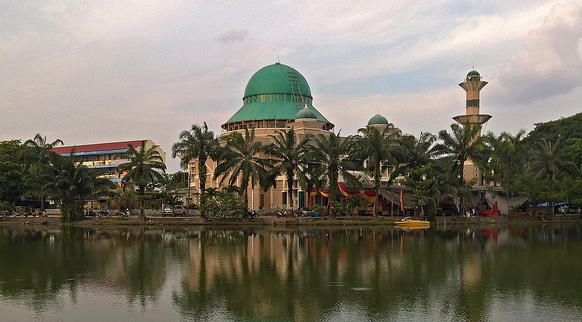 Palembang owns numerous types of attractions. Tourists can visit unique landmarks and vacation spots. For Muslims, visiting Taqwa Kambang Kecil Mosque is quite intriguing. The mosque is situated in Ki Ronggo Wiro Santiko Street. It lies in Talang Kerangga region. The government had spent lots of money to build such magnificent structure. A unique part of the mosque is its giant dome. It also features 6 smaller domes and a high tower. Tourists often use it for worshiping and finding peace. The atmosphere of the mosque is tranquil, for sure.

Exploring Taqwa Kambang Kecil Mosque
Taqwa Kambang Kecil Mosque offers a vast interior. It can hold up to 800 people. During IED Holiday, the mosque can accommodate more than 1000 people. Thanks to the ample yard. This vastness makes it more comfortable for visitors. They can either pray or relax in this mosque. There is also a small library inside, stores good collections of books. Moreover, the mosque features some offices. These include BKPRMI and MUI. Many theologians come here to discuss some stuff. Visitors can meet them, as well.

As mentioned earlier, Taqwa Kambang Kecil Mosque has a vast space. There is no pilling in the midst of the mosque. It feels comfortable and chilling inside. It features a regular platform, which is not too big and too luxurious. The platform is made of wood. It is just the same like other platforms of Palembang mosques. The visitors can do prayers in a comfortable manner. Thanks to ample space and comfortable ambiance of the mosque. Not to mention the structure is quite majestic.

Taqwa Kambang Kecil Mosque has undergone a renovation. It becomes better and bigger. Local people often come to the mosque. They spend a good time and vacation here. When the prayer time comes, they can directly go inside. Today, the mosque has been a meeting place for either tourists or regular worshippers. The atmosphere is chilling and the structure is amazing. No one gets disappointed after visiting the mosque. It is a unique place for finding serenity. Most the visitors are Muslims, after all.

Another unique thing is the pond. It is located adjacent to the mosque. The size of the fish pond is quite big. It is surrounded by the pavement. Due to its calming ambiance, the pond attracts many local people. In the evening, it becomes a gathering place among those people. The most crowded time is during holidays or weekends. Near to the mosque and the pond, there is an office of Indonesian Army. With all these attractions, travelers should visit the mosque during their vacation to Palembang.

How to Get There
Local people won’t be troubled in visiting Taqwa Kambang Kecil Mosque. It is because the mosque is located in the midst of Palembang city. What about outsiders or foreigners? Well, they need to reach Palembang first. It can be either air or land. Next, they must head to Talang Kerangga. The mosque is located at Ki Ronggo Wiro Santiko Street. It is also near to the official residence of the Palembang Mayor. Furthermore, the mosque is near to Kambang Iwak. Thus, it won’t be hard to find it.