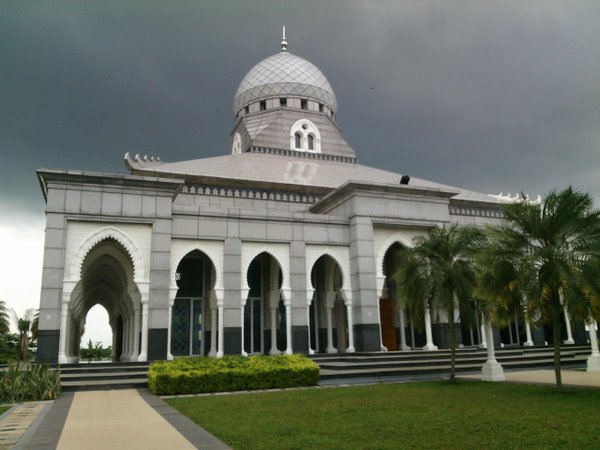 Palembang is a worth to visit. It is the capital of South Sumatra, Indonesia. It is also the second largest cities in Sumatra Island. When it comes to tourist destinations, Palembang offers numerous attractions. For example, there is the historical Bayumi Wahab Mosque. It is located in Tanjung Sejaro village, Ogan Ilir. The mosque is located in the midst of the village. There are many traditional houses around it. Not to mention there are astonishing rice fields nearby. Visiting Bayumi Wahab Mosque gives a unique experience for tourists.

About Bayumi Wahab Mosque
The name of the mosque comes from a famous person. He was H. Bayumi Wahab who recognized as a local tycoon. He did many good things back then. He built IBA University in Palembang. The mosque was built by his descendants. It is the way to commemorate his presence in the past. Today, the mosque becomes a perfect place to rest during a trip to East Sumatra. It offers both relaxing and peaceful atmosphere. The mosque features an ample parking lot. No worries. It is free.

Some people take care of the mosque. They clean it regularly. They also take care of visitors’ vehicle. In terms of appearance, Bayumi Wahab Mosque applies minimalistic and modern architecture concept. It also applies traditional architecture of Palembang. Near to the mosque, there are some date palm trees. Not to mention it is quite neat and clean. It is a perfect place for worshipping and relaxing. No wonder, more people come to the mosque either to worship or rest. It has been managed professionally by the staff.

Most of the tourists love its architecture. The mosque combines modern and traditional concept. The roof of the mosque applies Limas concept. There is also a tower. It has the height of 28 meters. No wonder, it appears to be a majestic mosque. Plus, it is located in a strategic location. Many travelers stop by for relaxing and worshiping. Some of them take an opportunity to take pictures. In fact, local people often use the yard for a pre-wedding session. Bayumi Wahab Mosque is surrounded by beautiful date palm trees and grasses. What a beautiful structure!

The House of Bayumi Wahab
The next destination will be the house of Bayumi Wahab. It is also a famous tourist spot in Palembang. As the name suggests, it is the house of such famous person. It is located in Perwari Street, which is near to IBA. He had a good influence to the village. Today, the mosque and this house have attracted more tourists over time. Though, there is only a security in it. It’s because the descendants of Bayumi Wahab moved to Jakarta.

How to Get There
It is easy to reach Bayumi Wahab Mosque. Tourists should only follow the East Palembang Causeway. The destination is Tanjung Sejaro Village, Indralaya. The best transportation is a car. Actually, a public bus isn’t a bad idea. It doesn’t take much time, in fact. The road is smooth and the traffic is low. Everyone can reach the mosque without hassle. It will be a unique vacation experience for them. The mosque is both beautiful and comforting.